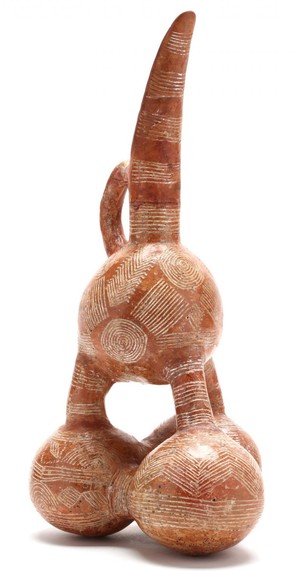 This is the kind of exuberant, playful vessel typical of the complex Red Polished ware of the early and middle Bronze Age that originally made me fall in love with Cypriot ancient pottery and subsequently to collect it.  It was probably made as a prestige piece for a funeral, to signify the wealth and influence of the family. Priscilla Keswani has argued that these funerals with lavish gifts and feasting and drinking were secondary funerals after the body had been in a simple grave for some months or years.  When the flesh had been stripped from the bones, they were bundled up and placed in a communal tomb of the ancestral kin group. Possibly the spirit, now no longer subject to corruption, only now became fit to be an ancestor. Often several new ancestors were buried at once and the tombs were sometimes used for hundreds of years. This idea of double funeral has been found across the world by anthropologists. The interval between them allowed the family time to collect materials for the major, second one.

3 spherical bodies are joined by short linking sections in a triangle and the necks of these vessels support a fourth one with a cut-away spout.  In effect it is composed of 4 jugs with their interiors communicating.  The whole thing is covered with red slip and decorative incisions filled with lime, each sphere decorated with a different patterns, which is the case with at least two of the other known examples (otherwise this much-mended piece might have had me wondering if it was a composite fake. It is reassembled from at least 13 pieces and all the lower bodies are reattached to the upper one and to each other.  However at least one of the joins of necks entering the base of the upper jug is un-mended, which reassures me.

Modern potters such as Ramié have imitated this form, including Picasso who turned it (in several versions) into a figure supporting its head in its hands.  Desmond Morris illustrated 9 other versions of this design in his book The Art of Ancient Cyprus (p 91-93 and Fig 159), one very large one with multiple extra spouts and 3 smaller bodies (in the Museum of Cyprus, which owns several of the others), plus there is one in the Louvre, and one in the St Barnabas monastery museum. However this is one of the best.  (There are also other, simpler variants of the type, where the necks of the 3 lower vessels simply come together to make one spout, without an upper body). Most of these complex vessels come from Vounous in the North (and some other multi-bodied types from nearby Lapithos), but one version in White painted ware came from near Morphou a little to the west and one from as far away as Katholiki (near Limassol).  Due to my example's similarity to some of those from Vounous, I assume mine is likely to be from there.  It seems to have been the engine house of most Early Cypriot innovation, joined slightly later by nearby Lapithos.

Some surface chips, repairs to spout, handle and supports as mentioned; hairline cracks to base. The tip of the cut-away spout may be wrongly restored: it would be usual for it to be sliced across at right angles, leaving a semi-circular tip shape, rather than narrowing to an almost flat point.  I may have this investigated, and re-modelled if the tip turns out to be a restoration.

(Ex Museum of Cyprus, Jacksonville, New Carolina, USA. Assembled by Dr Takay Crist after the Turkish invasion of North Cyprus and opened to the public as a museum in 1988. This century the museum has not made significantly acquisitions. It consisted of antiquities, documents, maps paintings and artefacts and was endorsed by the President of Cyprus as saving the antiquities from the market. The sale of the entire museum collection represents a betrayal of the trust of Cyprus and almost all record of the provenance and history of the pieces seems to have been lost, including their dates of acquisition. However the dealers Charles Ede identified this piece as having been bought by them from "Chinor" in 1989 and illustrated in their catalogue "Cypriot Pottery XII" (1991) Plate 2. A Photo of the piece appeared in a Jacksonville Daily news piece about the museum in 1998. (Chinor might have been the auction mentioned in another provenance (it is the name of a village in the Chiltern hills), Or it could be the name of a collector. Further information is no longer available from Ede as purchase invoices from pre 1994 were long ago disposed of. A fellow collector tells me he has traced further back a number of others un-provenanced pieces from the museum auction.) 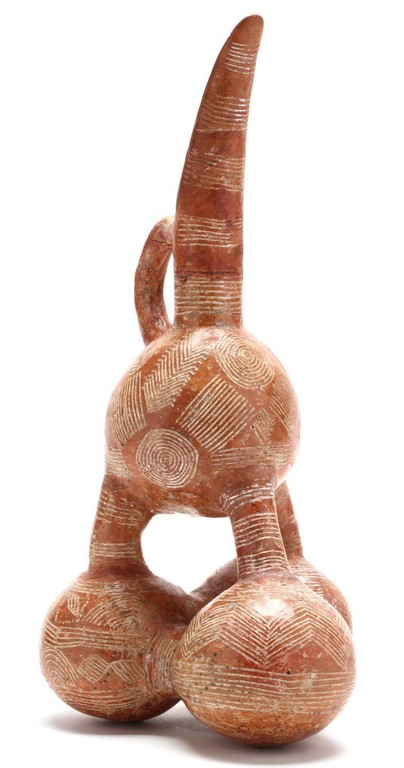