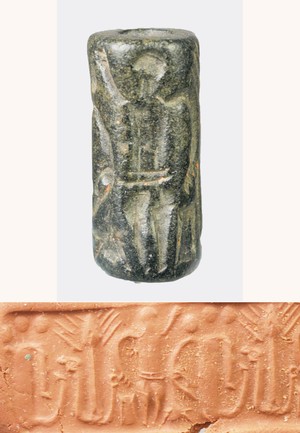 A carved stone (chlorite) cylinder seal decorated with a human figure, a palm tree and an unidentified mythical or zoomorphic figure below three discs. The design is extremely close to the decoration on a cylinder seal from Enkomi, the most important town and port of Late Bronze Age Cyprus (British Museum item 1897,0401.690) and may have been made by the same engraver.  There are a lot of fake cylinder seals around but this appears to be genuine.

A few earlier, imported stamp seals are have been found in Cyprus but the dominant Late Bronze Age cylinder seals were introduced from Mesopotamia (where they existed long before) in the 15th century BC. To start with they were imported and then for a while imitated styles from the mainland, but a distinct Cypriot tradition developed late in the century.  Most show deities or demons dominating fantastic or real animals in a near-eastern style frieze composition. Many, such as this one, are pierced longitudinally so that they could be worn and some have gold caps on their ends.

Cylinder seals were rolled on wet clay to make a stamp . They were used sometimes by administrators to secure or identify containers, such as pithoi, or sealed doors  but also like a signature by participants or witnesses to transactions (on clay tablets). They were also prestige objects worn as jewellery.

Late in the Late Bronze Age and early Geometric the making of seals almost died out and later in the Early Iron Age, Phoenician and Aegean stamp seals predominated. 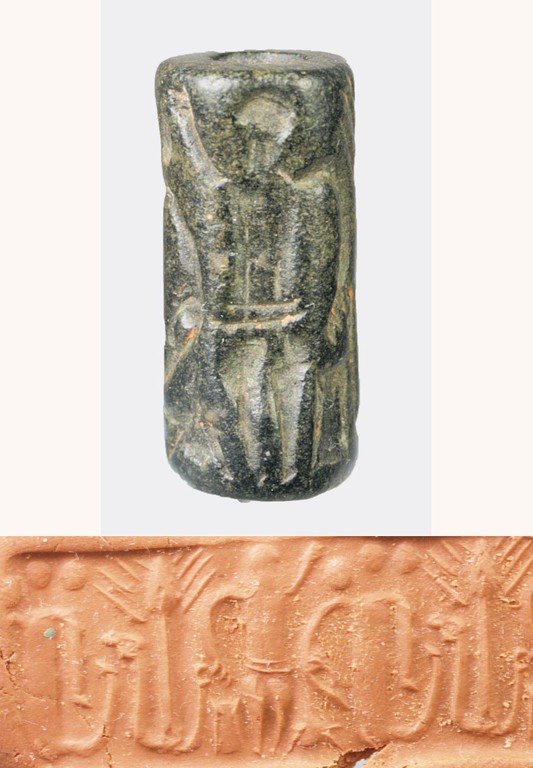