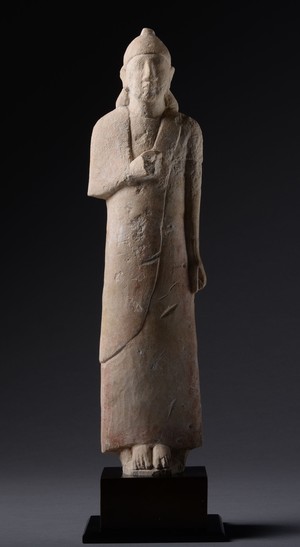 Archaic votive figure of a male worshiper in a typical standing pose found from the mid 7th century, but probably here of the early or mid 6th century BC. The figure, other than the head, is plank-like and has a flat back from shoulders downwards, presumably intended to stand against the wall of a shrine.  The rigid pose is derived from Assyrian models (the Assyrians had conquered Cyprus near the end of the Geometric period and the island, though retaining its own local rulers, only became properly independent in 663BC). By contrast, in the later 6th century one foot of a full length figure would usually have been depicted further forward, as is found in Archaic Greek sculptures and Egyptian figures, though Greek male figures are usually naked.  The position of the right arm is specifically Cypriot.  He is dressed in a style described on the Metropolitan Museum website as derived from Eastern Greece, wearing an ankle length short sleeved chiton with a shorter cloak over the top (which the Greeks called a Himation - a rectangle of heavy woollen cloth which could be worn in several ways, pinned with a fibula at the left shoulder and here perhaps draped over the right arm).  However, my earlier Assyrian influenced terracotta votive figure with beard has identical clothing and this is derived from local and Levantine sources. There is a confluence of influences and the Greek terms are perhaps inappropriate. His hair is swept back behind his ears in the Egyptian style (Cyprus was conquered by Egypt in 570BC and paid tribute, though they continued to be ruled by their own kings). He has a conical cap or helmet.  There are traces of red pigment along the edges of his garments.  The eyes are, unusually, not carved in the normal Cypriot almond shape, but are still very faintly discernible, and were possibly originally painted.  The piece extends into a long base which presumably fitted originally into a stone base (or even into the ground).  As exhibited it is slotted into an imitation-bronze base. Stone votive carvings are much less common than pottery examples which are found in large numbers in country shrines, but also occasionally in graves. There is no marble in Cyprus and the native Limestone does not allow the finely carved detail which marble encourages.

There is probably a restored break across the top of the body.

(Ex the collection of the writer, W. Somerset Maugham, (1874 – 1965). Sotheby's, London, 2th November 1967, The Contents of the Villa Mauresque, the Property of the Late W. Somerset Maugham, lot 157. Purchased at the above sale by Hammerton Galleries for £65. Subsequently in the collection of Michael Michaeledes, (1923 - 2015) a well known Cypriot artist resident in the UK. After his death sold Chiswick Auctions Sept 2015 lot 96) 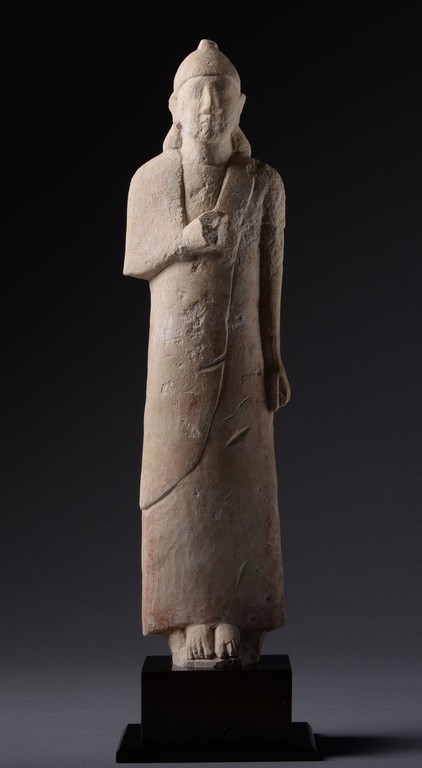