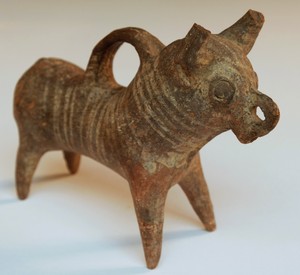 A base ring ware II pottery jug (sometimes classed as a rhyton or askos) in the form of a bull with applied and modelled details. The body is covered in a grey slip and retains much of its original white linear decoration. The jug is filled through the aperture between the head and handle, and there is a small spout through the mouth.These pieces may have been used in a Fertility cult similar to those in Crete, Greece and other countries in the region which feature bulls and sometimes (especially in the Early and Middle Bronze Age) other horned animals. They are slightly more numerous than the two Late Bronze Age types of anthropomorphic figurine put together (see my examples of both).

A Rhyton is a drinking vessel, whereas an askos might be used to pour libations. There are also askoi with a bull head spout on a body shaped like a wine sack. Later two types of hollow bull figurines with no filling hole, which cannot be used as a vessel, started to be made in smaller numbers and the two types continued simultaneously. There are probably about 400 of all types of bull figure from that period extant.  “Flat Head” anthropomorphic figurines from the time are given the same bovine type ear (possibly linking it to the Egyptian goddess Hathor) and all animal and anthropomorphic figurines have the same eyes made from an applied disc of clay inscribed with a circle. A loop above the snout may allude to a nose ring - a feature only found in 12% of the well over 200 known.  The type was made for about 300 years with almost no variation and are found in both settlements and tombs. In the latter they are often found with flat-head or earring anthropomorphic figures (which were made over the same time-span) though the two types are almost never found in the same tomb, suggesting they were specific to different allegiances or beliefs.

(Ex. estate of an archaeology professor resident in Canada and Western New York State, USA; acquired by him 1960's-1970's. Possibly the identity of this person could be established but the dealer who first bought this piece from his estate about 7 years ago has no record of the name and claims it is now too late to try to contact the family.) 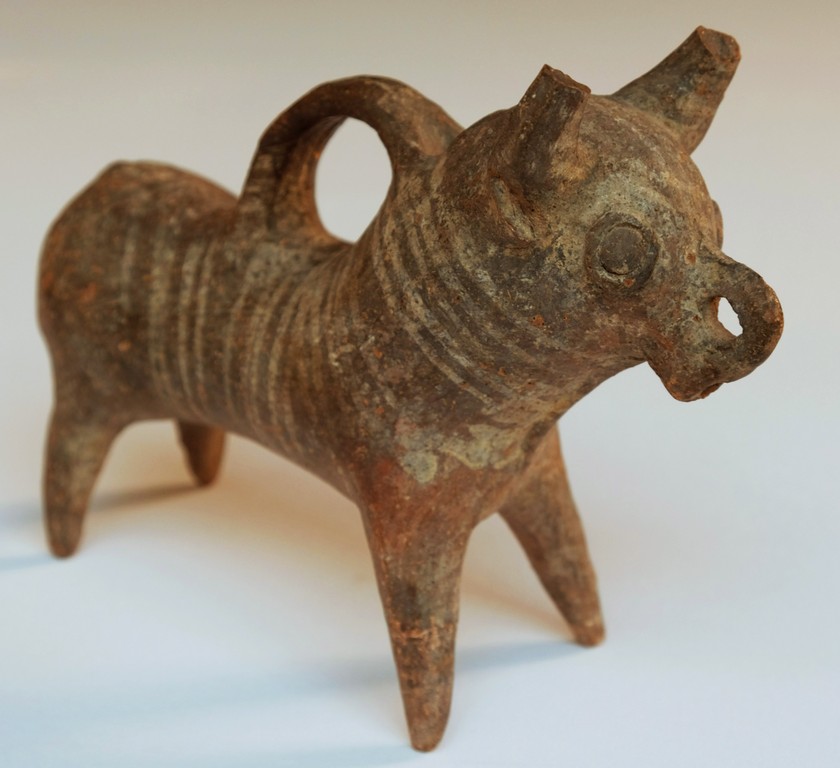