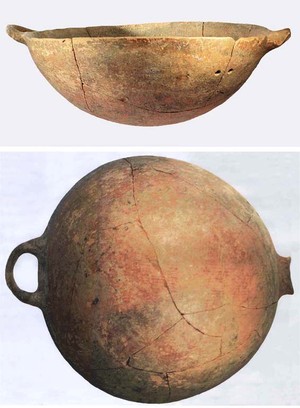 This thin-walled, round-bottomed bowl with spout and handle in Red on Black painted ware.  Here, as with Black slip ware, the black slip often failed to darken over much of the surface, leaving the red lines the darker element. Presumably this related to the temperature of firing. The bowl may have been hung from a peg in the wall when not in use. Both the outside and inside surfaces of the vessel (the latter only slightly visible on one side) are covered with 2 wide bands of 16 red-painted parallel lines at right angles to each other and between them similar short lines, also at right angles to the rim, though it is unclear how far in they go. They were painted in a matt, dark red-brown with a multi-brush, onto a background slip which varies from a pinkish red to buff to almost black. They are widely obscured by what I and the dealer thought was surface accretions (which could be professionally removed but at great cost). However I soon realise the paler areas are where the slip has flaked off.  There are some adhesions, especially on the inside which is more worn, but any attempt to remove them tends to take off the darker lines (and often the slip). The firing must have been very uneven. Unfortunately, although there are successful and well preserved examples, such flaking and variability are frequent in this ware.

Repaired from 15 pieces, but two holes have been drilled in antiquity after firing, indicating an ancient mend or crack, which must have been acceptable in a piece for a tomb. (Almost all of these pieces were found in tombs. Generally only shards from rubbish dumps remain from pieces in domestic use, since they were used till they broke and the sherds did not tend to remain together. Beliefs which caused possessions to be left in tombs have advantages now!).

Although the Middle Bronze Age continued the Red Polished ware of the Early BA, it also produced some high status painted wares, White Painted ware being the most dominant.   Red on Black painted ware was produced for a quite brief period in the Middle Bronze Age III, and only in the Karpas Peninsula and Eastern Mesaoria. The source sites are now in Turkish North Cyprus and have hardly been investigated.  It was exported to the Levant and is there used to date other wares found with it. The dense pattern of lines and use of multi-brush, as well as the flaking, matt surface are typical. It has been suggested that Red on Red Ware was a more fully oxidised variant of this, or was simply a mistake in firing.

Early and Middle Cypriot pottery is thought to have been locally produced by households, in contrast to the mass produced and traded wares of the Late Bronze Age.  In general Middle Bronze Age pottery tended to smaller forms than the Early BA. Cyprus now had established trading contacts with Palestine, Syria (Ugarit), Babylon, Southern Anatolia and especially Egypt, and Minoan Crete which supplied luxuries and had merchants in Cyprus. As well as Copper, Cyprus exported some White painted ware pottery. Imported gold and silver trinkets are found and faience beads and alabaster bowls from Old Kingdom Egypt plus cylinder seals from Syria and Babylon. Several port cities, eventually with ashlar public buildings, grew up on the south and East Coasts in the Middle and late Bronze Age, chiefly to trade copper. Some fortresses were built later in the Middle Bronze Age but it is unclear what danger they guarded against. Possibly they simply guarded the passage of copper from the Troodos mountains to Enkomi on the East coast which became dominant at this time.

Click on image to enlarge, as with all these images.

(Ex. Collection of Jorgen Jacobsen, Bornholm, Denmark; bought while on UN duty with the Danish peace-keeping forces on Cyprus (Dancon X/XI) between October 1968 and October 1969. Part of a large collection he made from antique shops in Cyprus during his posting.) 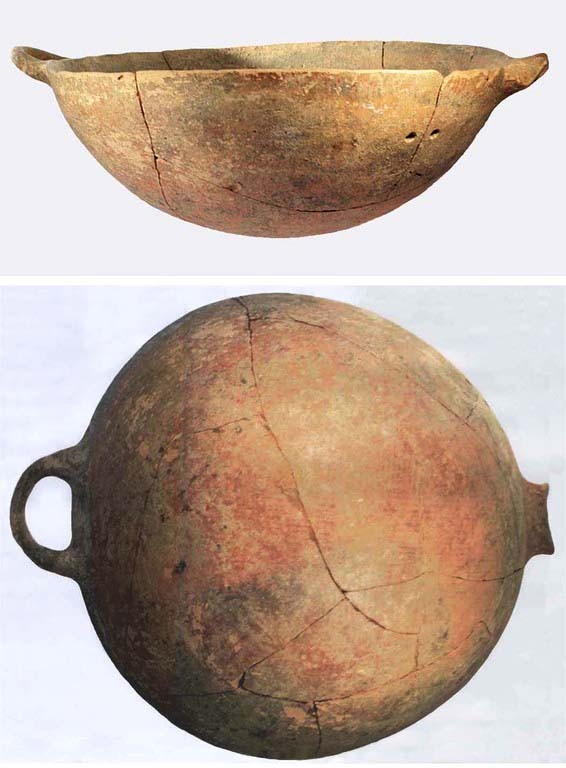