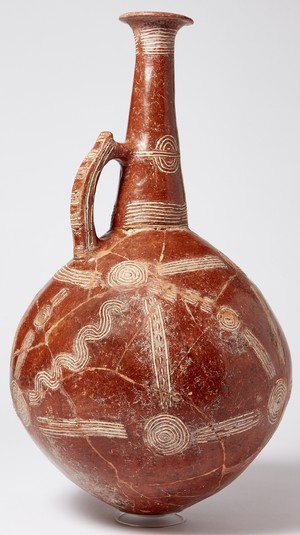 These large Red Polished Ware flagons usually have decorations in relief, like those above. This, perhaps slightly later version, has elaborate and dramatic incised patterns. These were filled with white lime in the usual manner of the Early and Middle Bronze Age. They were presumably used to serve water, wine or beer during feasting. Like almost all of these large flagons, or intact vessels of any kind, it must have been found in a tomb and would have been used at the funeral feast. Priscilla Keswani has convincingly argued that by this period the norm after death was an initial temporary grave and, many months or a couple of years later, after the flesh had been removed from the bones, the bones were repackaged and put in a communal grave of the kin-group, which was sometimes used for hundreds of years. It is likely that this second funeral (often for several individuals) probably celebrated their rebirth as ancestors.  It would have been the occasion for sacrifices, feasting and the offering of grave goods such as this flagon; the interval between having allowed time for making such items and collecting resources for the feast.  Opening the family tomb less often, and pooling resources for one big event would have made sense and allowed more impressive grave gifts to enhance the prestige of the donors. It is possible, that such vessels of this kind were also used at other communal events. Rounded or slightly pointed bases were the norm for Early and Middle Cypriot vessels, and would have required dips in the floor to stand in, or in the case of smaller vessels, probably some sort of organic ring to stand on. The diagonal wavy line on the side of this flagon is very unusual.

Recomposed from several large fragments. Some of the joins were very messy and confusing and I have just had much over-painting removed.  Two pieces are proved to be restorations, the larger including the upper end of some wavy lines (not on the side illustrated).

(Ex private collection of BL (personal friend: full details in my records). Bought from Chris Martin (Ancient Art) 1990. Mr Martin claims it came from a private collection via another dealer and is searching his records to see if he can find a name.) 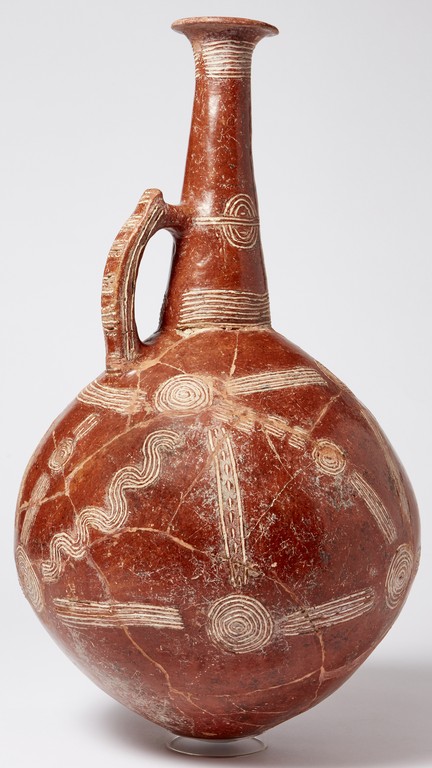