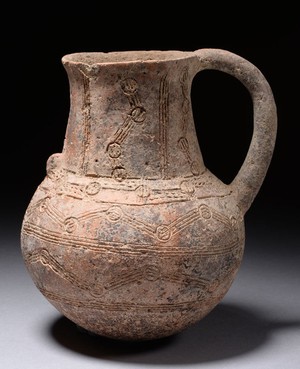 Drab incised polished ware, with rounded base. (Sold to me as Early Bronze Age.) Drab ware was a variant clay slip of Red polished ware. The exuberant incised patterns would have been filled with white lime. Early and mid Bronze Age pottery is all hand-made by pinching and coiling techniques. Lugs, as here on the neck, were common, either pierced or plain: now usually purely decorative. Drab-ware and black-ware variants of Red Polished ware come from South and West of the Troodos mountains and are usually less burnished. Cyprus was the crossroads of the Mediterranean world and with its abundance of copper it was an important center for seafaring trade and commerce in antiquity. Early and Mid Bronze Age Cyprus was an independent country, with its own unique styles of pottery. The warp-weighted loom and bronze tools and weapons had been introduced with this period and cattle were reintroduced to the island in large numbers, having died out in the 8th millennium BC. Dogs, sheep, goats and pigs were kept and fallow deer and boars hunted. Cereals and pulses were grown.