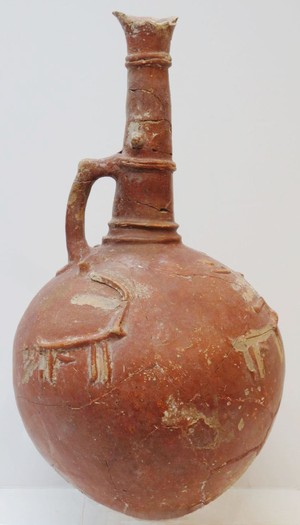 Red polished ware large flagon with round bottom and relief decoration including, originally, 2 stags with branched horns and 2 goats with swept-back horns (or possibly mouflon?). The deer in ancient Cyprus were fallow deer, which were a popular motif in pottery along with male goats of the Bezoar type (a kind of ibex with long, swept-back horns) and (most commonly) bulls.  The erect genitals are emphasised on all three of the readable animals on this piece, in keeping with the presumed male fertility symbolism of these animals, which is similar to that in a number of  cultures at the time.

The flagon is in a bad state with many breaks and crude in-filling in 2 places.  Large areas of the relief modelling of the stags have broken off, leaving clear traces of where they used to be. In one place a groove has been made in the pot fabric to key-in the stag body (it continues under the still existing part, and some original clay still fills the other end).  However only two of the figures are complete and the other the head of the second stag.  The body of the latter and the fourth figure are visible only as a faint trace of slightly different colour.  I though initially that these missing areas had been over-painted in restoration but investigation by a conservator shows the red slip on these areas is original.  It must be that while the piece was dried, but before it was slipped and fired, these areas of modelling had broken off, perhaps never having been well adhered.  It is notable that a few areas with retained modelling appear not to be well adhered. It is unclear how much restoration should be done, since we do not want to cover up archaeological information.

(Ex collection of David Read, bought between 1966-1969 while working as a government official in Cyprus. He explored the ancient sites and museums and got to know local collectors and historians.I have photos of the piece in his house from 1971.)