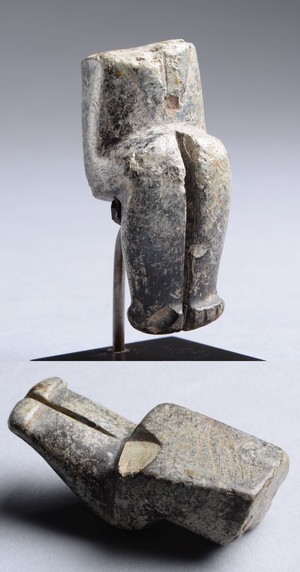 Lower half of a Chalcolithic cruciform figure, broken just below the (always outstretched) arms. This figure would have been relatively large (perhaps 10cm since the neck of these figures is always very long, forming the characteristic almost symmetrical cross). These iconic figures of Chalcolithic Cyprus are found across the island but particularly in the South West where they (and probably this piece) were mostly made.  In a few instances the arms are replaced by a second figure at right angles to the first, or the second figure may even stand on top of the other, forming a double cross.

They are usually considered to be birthing figures, probably intended to magically promote successful pregnancy and childbirth and are found only in the graves of children, and women (where sex can be determined). They are depicted in a crouching position used in childbirth (or as in the small pierced versions, probably alluding obliquely to this position) in which a helper would have supported the woman from behind.

The vertically divided V shape on the front of the torso suggests the stylised depiction of breasts found on two much larger limestone cruciform figures, one probably from Souskiou, now in the J Paul Getty Museum at Malibu. The shape is also very suggestive (probably intentionally) of a displaced female pubis with vaginal cleft. Indeed the other figure, the “Lemba Lady” now in the Cyprus Museum, has both breasts and vagina which echo the same shape. This latter figure also has similarities to some neolithic figurines.  At one time all these figures were generally believed to represent a fertility goddess and as recently as 2004 Louise Steel suggested these larger figures were cult figures to which the small, portable versions referred.

The figure is broken cleanly across the middle. Whether this might have been done deliberately I do not know. Certainly there is some evidence this was done to many Early/Middle Cypriot plank figures, “killing” them to enter the world of the dead. However it has been pointed out to me that plank figures are not well fired and it is easy to break them accidentally.  Certainly a few cruciform figures seem to have been deliberately broken or defaced and the famous ceramic model of a house with a door found at Lemba, containing terracotta figurines also relating to childbirth, seems to have been deliberately defaced before burial, by the door of a house. This may have been at the point that figurines ceased to be made at the end of the Middle Chalcolithic, when there seems to have been a general change in beliefs, practices and social organisation of communities.

(Ex 1960s Savva collection (Savva was a Cypriot living in England. I am uncertain if this might be Savva the artist) . Exported from Cyprus, 1960s, by repute. The dealer said he was told it had been stored in a box with other antiques wrapped in 1960's newspaper.) 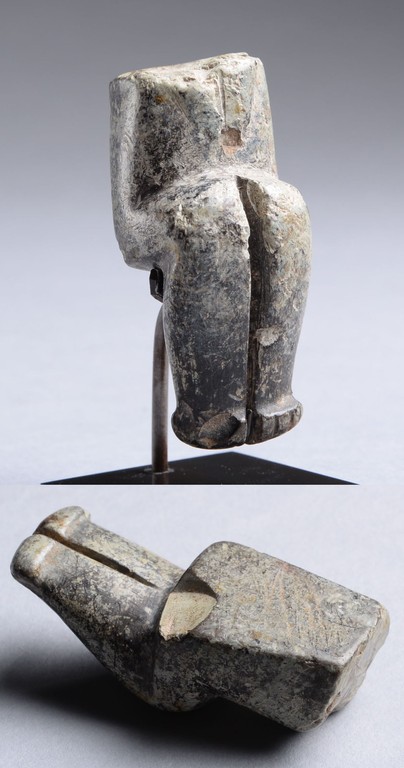