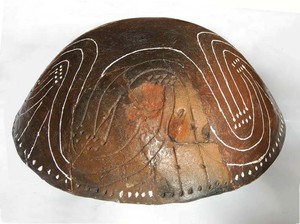 Central and East European, Linear Pottery Culture (Danubian I) round-bottomed burnished bowl with incised linear decoration and (5?) lugs. (Compare with less-crude, Early Bronze Age Cypriot incised polished ware.)  Fragment made of 5 pieces. Only about 1/8th of the vessel is original, the remainder has been carefully reconstructed with painted plaster, repeating the existing pattern 4 times, though originally without the other (4?) lugs, which I have added. The restored parts have recreated the look of  filling the incisions with lime (as is found also in Early Bronze Age Cypriot pots).  Note that the original bowl was only partly black with other parts merging into reddish buff, representing different conditions in the kiln. The densest evidence for Linear Pottery Culture is on the middle Danube, the upper and middle Elbe, and the upper and middle Rhine. It represents a major event in the initial spread of agriculture in Europe. The pottery after which it was named consists of simple domestic kitchen ware: cups, bowls, vases, and jugs: without handles, but in a later phase with bases and necks and often lugs as here.

The large fortified settlement at Uzlonk (Poland) was from the end of the culture. It had 30 large trapezoidal longhouses, between 7 and 45 metres long, made of massive beams with wattle and daub infill, plus 80 graves. 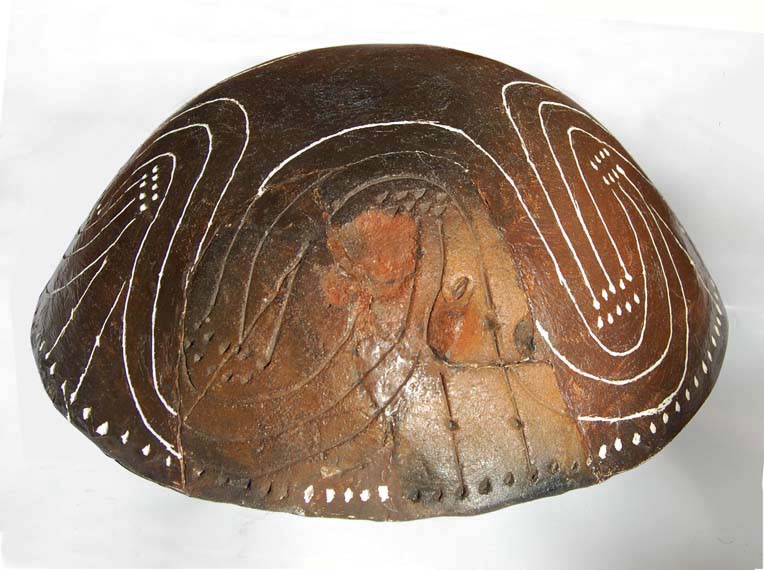