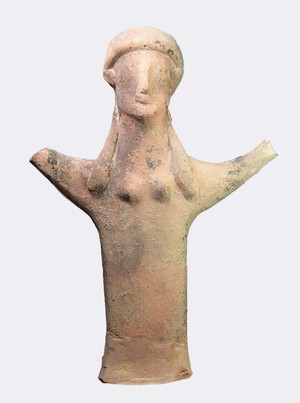 This type of pottery figure, with raised arms, is particularly characteristic of the Paphos district but spread to other areas. Normally found in open air shrines focussed on an altar, or in bothroi (sacred pits for offerings). They were originally designated as a Goddess (the local goddess later identified with the Phoenician “Astarte” and later still, Aphrodite), but now most usually as a votary standing in for the donor at the shrine.), . The position with raised arms is believed to be one of prayer and worship.  The figures with raised arms are quite common and derive from Cretan Phi figures (named after the Greek letter they resemble). They started to be made in the 11th century in Cyprus. However almost all have a hollow cylindrical "snowman" body or a slim, solid cylindrical body, so this flat figure is very rare. Female votive figures have been found in huge numbers, the various types without raised arms often made in moulds with a flat back.

This figure wears a turban-like hat and has long hair hanging down on each side of her breasts.  The eyes are not modelled, so were probably painted on, which is why she has been put in this section.

The figure has lost one whole hand and probably the fingers of the other, plus  the lower part of the body.  The lowest portion is currently a (probably inaccurate) restoration.  It should almost certainly be longer and probably not splayed out sideways at the bottom. One flat figure with raised arms ( Cyprus Museum C323) has feet sticking out at the bottom to stabilise it. Another simply ends after a very long body.  I may re-restore it differently, or simply take off the restored part and mount it in mid air to indicate the incompleteness. Currently mounted on marble display block.